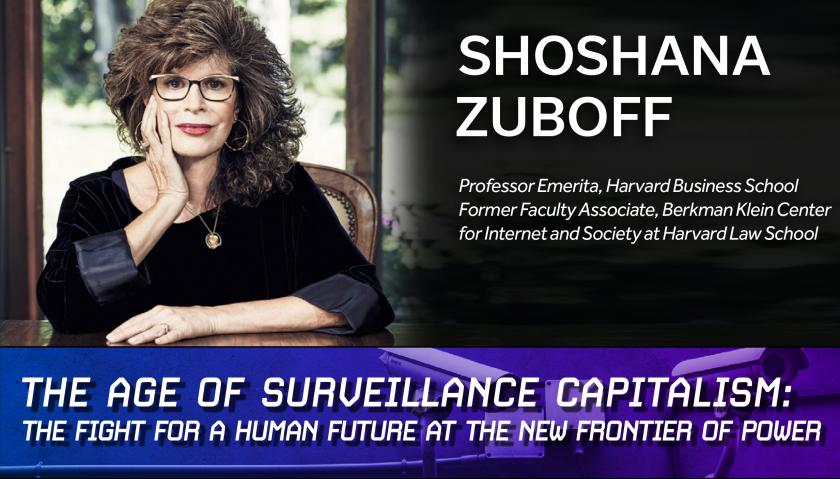 Shoshana Zuboff, professor emerita of the Harvard Business School, wil present "The Age of Surveillance Capitalism: The Fight for a Human Future at the New Frontier of Power."

In her book, The Age of Surveillance Capitalism, scholar and sociologist Shoshana Zuboff posits a detailed examination of the unprecedented power of surveillance capitalism, by which our personal information, monetized and exploited by big tech companies, is then used to predict and shape our behaviors. In this frank and necessarily lucid talk, Zuboff defines the terms of surveillance capitalism as a new economic system, pioneered at Google and later Facebook, in much the same way that mass-production and managerial capitalism were pioneered at Ford and General Motors a century before. Zuboff speaks urgently to our need to protect ourselves in this unprecedented age, and not try to resist or strike in the ways we did a century ago. Google, Amazon and now fallen behemoths like Cambridge-Analytica aren’t going anywhere, but as Zuboff expansively demonstrates, we can create countermeasures to stave off the monopolistic workings of these companies. We have the power to  demand more from these seemingly all-powerful corporations. If they want what we provide (data), they in turn will have to change their usage tactics. The citizen desire and the leverage is here, Zuboff argues—and it’s in the companies’ best interests to change. Rather than facing the subject with worry or paranoia, Zuboff argues for us to pay attention, resist habituation, and come up with novel, innovative responses to the issue of surveillance capitalism, as novel a system as we are likely to know.

Just Infrastructures was launched by researchers in the iSchool, Department of Computer Science, and College of Media to interrogate the complex interactions between people, algorithms, and AI-driven systems.

Find more information and register for the event on the Just Infrastructures web page.